Many people have asked about the origins and eventual demise of the “street gardens” remembered from childhood days. In days gone by, Macclesfield’s main street was graced by a “Street Garden.” These images and notes will give a “Glimpse” of that era.

Street Gardens as they were in the 1930's

Mid 1932: A group of ladies formed the Women's Progress Committee to raise funds for the erection of a fenced garden in Venables Street. Mrs. McDonald was elected President and a dance held on August 20th raised 30/- ($3) for the funds, so quotes for wood and cyclone fencing could be obtained. There were no reported details of the estimate accepted for work on the fence, but it was “satisfactory” and hopefully some volunteer labour would be forthcoming as well.

An American tea and card afternoon added 2 pounds ($4) to the funds and by October the fence was ready to be erected, with two four feet gates and two extra posts and two pickets each side of the main gate. Mr. Whitehouse, the licensee of the Davenport Arms, offered to make the gates and pickets and a busy bee completed the work.

November 1932: The Sports Committee donated 5 pounds ($10) for fence paint and plants and in May 1933 the paths were gravelled by voluntary labour, with the ladies providing refreshments to the workers. Mrs. A.E. Davis, a stalwart worker, donated rose bushes and the gardens inspired favourable comments from people passing through or holidaying in the town.

January 1936: Mr. Ken Bowen, delegate from the Men's Management Committee, attended a ladies meeting and spoke on the work being done at Crystal Lake, and asked for the ladies help with money raising etc. There was much work to do at the pool, for example, the refreshment kiosk to be painted green, with a red roof and cream paint for the inside; funds were diverted and the ladies provided refreshments for pool working bees. Council workers cleaned up the street gardens and the Committee asked the Council to take control of it.

June 1936: Once again the gardens were in a bad state and the women decided to plant more shrubs, and have paths cemented in readiness for the State Centenary Celebrations. The Men's Management Committee was asked to help with finances as Mr. Webb had estimated the cost of cementing to be 13 Pounds ($26). The men donated 2 Pounds ($4) and ran a dance at which the ladies catered for a pasty supper, and also for the supper at the men's A.G.M. These efforts raised a further 6 Pounds ($12).

January 1937: The gardens had been refurbished with some Council assistance, the fence mended and painted and a wooden arch erected over the main gate. Mr. Webb had agreed to put a name plate in position on the archway. The garden to be named “Macclesfield State Centenary Gardens” and Lady Hudd was asked to formally open them during the State Centenary Celebrations, and the Committee to entertain her at afternoon tea at the Macclesfield Hotel, after the ceremony. 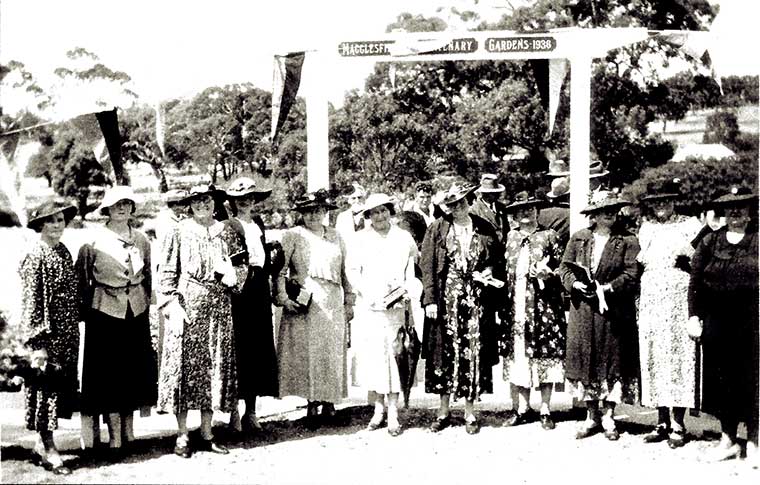 Note: The date on the entrance heading is 1936, matching the state's centenary year. There was some disagreement whether it should have been 1937, the year that the Macclesfield community celebrated Centenary Year since they were unable to fit it onto the calendar for 1936.

April 1937: The Centenary Committee donated 10 Pounds ($20) to enable a capable man to dig and prune while Mr. Webb was appointed caretaker.

1938: Mr. Wyatt was paid 1 Pound 10 Shillings to clean the gardens, paint the fence, and more shrubs were purchased.

1940: Mr. Holthouse was engaged to clean up the gardens for the Christmas season, a series of bridge evenings held to raise money and an approach made to the school to ask if the children could attend them. Mr. Jack Addison (of Mulberry Cottage), placed a tap outside his fence to make water available.

1943: The School Committee offered to help with the upkeep, the timber around the flower beds was disposed of and the children were attending to the gardens.

September 1945: The gardens once again appear neglected and Mr. Smith offered to clean them up for summer.

November 1945: Mr. Anderson has taken over and the Council has been asked to enforce the law to keep cattle out of the main street.

1949: The fences were taken down as there were no funds for upkeep. Garden care was handed over to the newly formed Community Association with a newly elected Committee of delegates from all Township Committees and Sporting bodies. The garden site was cleaned up and a seat built around the large tree.

For many years, part of the concrete paths and a rose bush persisted but, in time, these too disappeared.

Today we are reduced to a few council “street boxes” outside the Post Office, the Institute and the Three Brothers Hotel, and a few other places in the main street, which have been planted with native shrubs and attended by the Council, with help from Joy Steer, and others.

Note: We would appreciate any other images and information concerning the early gardens.