Read the speech further down this page here by Ray HONEYCHURCH, Secretary of the factory for 46 years, who was 95 years old when he spoke, very well, at the book launch.

We begin this history in the 1890’s when Mr Samuel Davis opened a creamery on the family property at Bugle Ranges.

In 1908 Samuel bought the ‘Macclesfield Dairy Produce Company Limited’ from Mr Alfred Jarvis for four hundred and fifty pounds, including all the fixed and moveable machinery plant and appliances. The factory was located on the site of the old brewery, being (sections 83, 84 and 90) containing two acres, one rood and fourteen perches or thereabouts. (Articles of Agreement dated 13th July 1908). This was the start of the Davis’ family involvement which continued through to 1944. 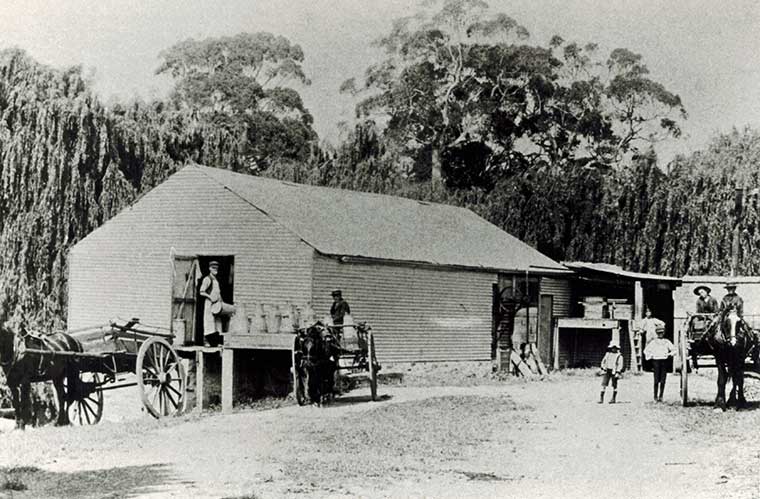 In 1937 they built a new factory on Searle Street in response to the developing dairy industry and the growing demand from the Adelaide market. 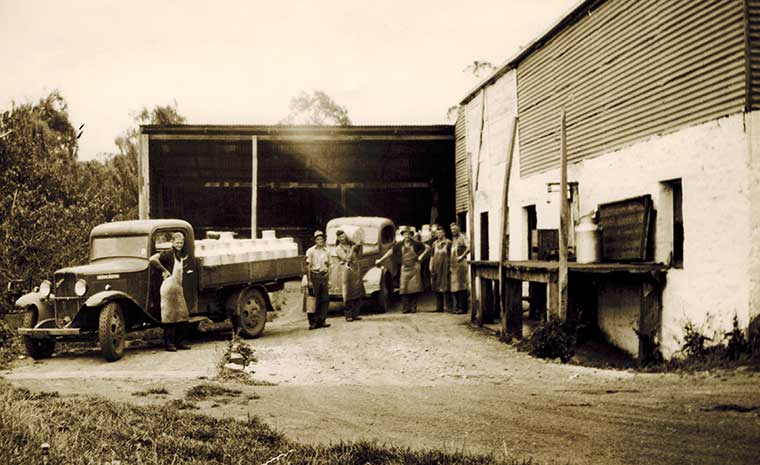 For the next 31 years Herb Gallasch was the Manager of the Jacobs factory.  During this time the factory underwent several extensions and more than doubled in size to increase their capacity to process greater quantities of milk into top quality cheese. 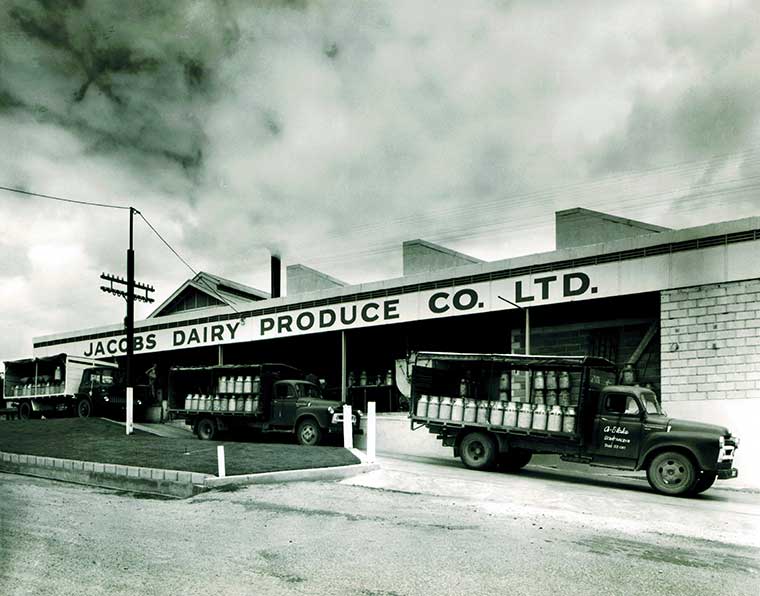 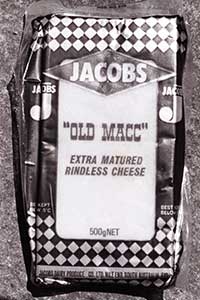 ‘The Old Macc’ was a full flavoured mature cheddar that was very popular with the local market.

Sue Wright explains the cheese making process at the time:

The Macclesfield factory achieved great success with their award winning cheddar cheese and was rated highly by the Japanese market.

The Meiji Company is the biggest Japanese buyer of Australian cheese, and purchases through the importing firm of Mitsubishi Company form practically the entire production of cheese from the Macclesfield factory. (from the Mount Barker Courier, March 22, 1967)

Macclesfield was one of the first factories to make rindless cheddar cheese and they cut and packaged all of their cheese for the local market.  Cheese was matured in the underground cellar and cut and packed in the cold room. 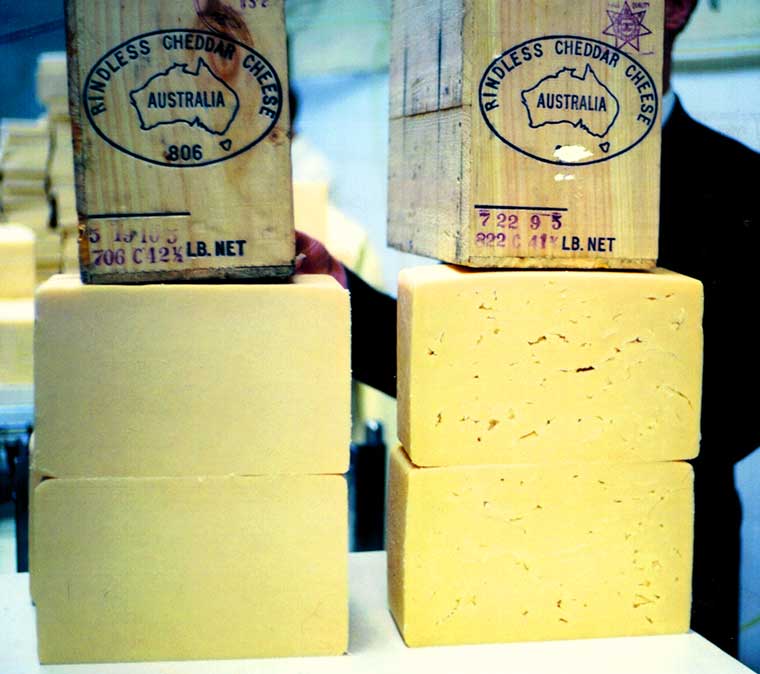 The dairy industry underwent significant changes during these years, including increased government intervention and regulations around food manufacture and health standards.

In the 1970’s, there was a growing demand for fresh milk and fresh milk products, including yoghurts, creams and custards, from the increasing population of Adelaide. The Dairy Produce Companies saw that it was more profitable to supply fresh milk to the city market and cheese manufacture as simply a way to use up surplus milk. Jacobs continued with the collection of milk in cans for a while but there was a push to use bulk refrigerated tankers which enabled milk to be transported a greater distance.

In 1975 they sold the company, which comprised cheese factories at Macclesfield and Mount Barker as well as a 35% share of Metro Milk, to Southern Farmers. They closed the factory as part of a rationalisation scheme and an amalgamation of activities with other factories in the Southern Mount Lofty Ranges.

Jenny Slack (nee Gallasch) describes some of the effects of the closing down of the Cheese Factory:

The Oral History Project of 2013

This was to be known as the ‘Macclesfield Butter and Cheese Factory Oral History Project 1937-1975’ and was carried out under the auspices of the State Library of South Australia.  They provided the ‘state of the art’ recording equipment and on-going support and encouragement.

Fifteen interviews were recorded and these are now stored in the JD Somerville collection (OH1022); copies are also held by the Macclesfield Community Association.

We recorded the memories of former employees, contractors and others with links to the factory as a way of bringing to life this unique period in the town’s history.  These fifteen interviewees represented more than one hundred and sixty workers who were employed at the factory during these years.  Different generations of local families worked there over time. This helped to create a very stable work force and many of our interviewees were long time employees at the factory.

Through their recollections we gained an appreciation of the central role this factory had in the community both economically and socially.   Economically the community prospered as the local men kept a few cows and grew a few potatoes and worked at the factory. That was their day time job.

Socially, a number of our interviewees met their future partners while working at the factory, and family connections within the town were strong.  It was the major employer of people; it provided a store for farm supplies, a veterinary service and was surrounded by dairy farmers who supplied milk to the factory.

Bill Vaninetti talks about the truck routes to collect the milk:

Speech by Ray HONEYCHURCH, Secretary of the factory for 14 years, who was 95 years old when he spoke, very well, at the launch of "At Work - Macclesfield Cheese Factory, 1937-1975", by Lesley SCHACK.

Over the last few weeks I have been casting my memory back 73 years to 1944, the year that Jacobs Dairy Produce took over the Macclesfield cheese factory from the DAVIS family. I will give you a quick rundown on the events that followed without going into too much detail. 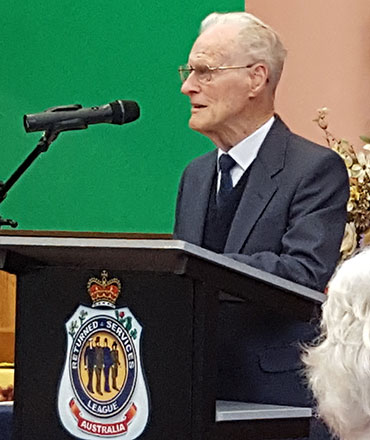 I clearly remember Mr. Ken DAVIS coming into Mr. HANSEN’s office with the plan of the Macclesfield factory and spreading it out on Mr. HANSEN’s desk and offering the factory for sale to Jacobs Dairy Produce Co. Ltd. Mr. HANSEN was very enthusiastic about it and wasted no time in putting the proposition to the Directors. They checked it out to see if it was as good as it looked – and it was, so the purchase went ahead. [Mr. HANSEN was Jacob’s Manager, Mt Barker].

Mr. Herb GALLASCH was appointed manager and as far as I can recall the transition went smoothly. Mr. HANSEN told me many years later that he told the directors, if they didn’t buy the factory, he would and he said he would have too, he wasn’t bluffing. The factory could have been Hansen’s Dairy produce Co!

By the 1950’s – 60’s the Macclesfield milk intake had increased considerably and the factory was extended to cope with the increase and it was producing 1000’s of tons of choice and 1st Grade cheddar cheese for export to Japan.

In the late 1960’s Herb was appointed a Director of the Company and I was appointed Secretary of the Company. Then came the crunch in the early 1970’s. The Australian dairy Produce Board advised us that we would have to upgrade our factories to the required standard to retain our export license.

I don’t know if the directors got an official quote for the upgrades but there was a figure of hundreds of thousands of dollars mentioned at the time. The directors considered this cost and
other factors and decided to sell out. If we didn’t have an export license we could never sell the 1000’s of tons of cheese locally.

Later at a Board meeting Herb GALLASCH handed a letter to the Chairman saying, ’Now I’ll drop a bombshell’. The Chairman read the letter and handed it to me to read out to the directors. In it Herb announced his resignation as Manager of the Macclesfield factory and also his resignation as a director of Jacobs Dairy produce Co. Ltd. Herb was replaced on the Board by another Southern Farmers man.

Then Bob JACOBS and Mr. HANSEN resigned as directors in Jan. 1977 and were replaced on the Board by another Southern Farmers man. The Board then consisted of all Southern Farmers men and no more Jacobs board meetings were held after that.

The Macclesfield factory was closed down first and the milk was directed to Murray Bridge or Mile End for processing. Mount Barker followed later and I was transferred to their Mile End office where I became Assistant to the Commercial Manager as well as Secretary of Jacobs Dairy Produce.

I travelled up and down for six years in peak hour traffic both ways. There were no Heysen tunnels in those days and only one lane each way. It was a nightmare trip coming home through the hills at night time in the winter months with the drizzling rain, fog, semitrailers and dazzling lights of on-coming traffic. I retired in 1983.

Mount Barker factory finally closed in 1985. The Company was first registered with the Registrar of Companies on the 1st March, 1935 and deregistered in 1985, so it had operated for 50 years. I was with them for 46 of those years.

I am the last of the Jacobs Dairy Produce executive officers left from when Southern Farmers took over in 1975. All the Directors and factory managers have passed on.

I am now 95 so this feels like my ‘swan song’ today. Jacobs Dairy Produce Co. ltd. is no more and the name is almost forgotten in Mount Barker. Not so in Macclesfield. We are fortunate that Lesley SCHACK has researched and written the story of the Macclesfield Cheese Factory from A to Z and I hope this book receives all the support that it deserves.