Churches in the Macclesfield District 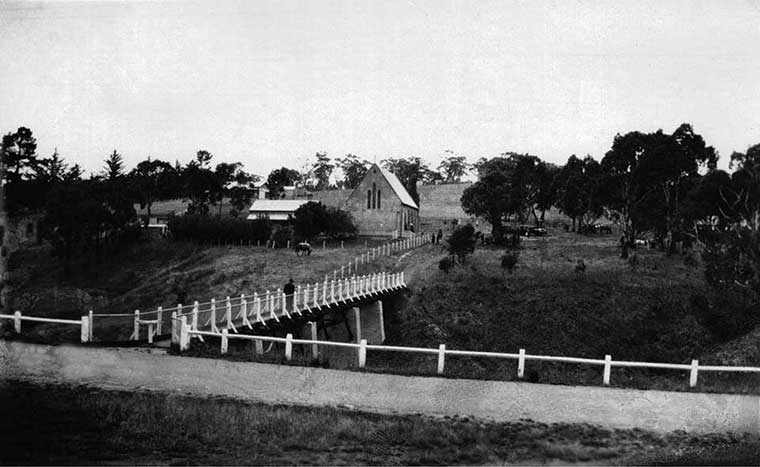 Church of St James the Less

The footbridge leading to the Church of St James the Less, a Roman Catholic church, over the recently named Battunga Creek. This Roman Catholic Church was opened on Sunday November 3rd 1867. The St Joseph's Nun's Convent is to the left of the church in the picture. This image is possibly from a postcard in about 1936. Apparently a "slab tenement" was used by parishioners before the church was built.

Note "Old Jack McMahon" walking over the footbridge, which was renamed the ‘Mary McKillop Way’ in about 2013. The first Catholic New Year's Day Picnic was held in about 1883 to help fund the bridge.

Venables Street is in the foreground. Luck Street is now behind the church, running left-right.

In 1848 the chapel was constructed from local freestone and the cornerstone was laid by the Reverend J B Austin who was assisted by the following members of the Building Committee: J B Austin Jnr., Robert Davenport, Samuel Davenport, S S Jackson, Mathew Linn and Henry Linn.

The Reverend J B Austin officiated in the church until 1879 when failing health compelled him to retire after 32 years of service to the pastorate. In 1878 and 1879 a vestry was built, the old roof was replaced, a porch was added and a chorister’s platform was erected. In 1924 E D Davenport placed the Title Deeds of the church in the hands of the Congregational Union and in 1927 the last official Congregational Service was held.

Thereafter the chapel was used as a lodge meeting place for both the Oddfellows and the Rechabites and in 1948 the Congregational Union made provision for the church and its site to become a recreation camp. It is now a private home.

The first Congregational Church in SA was founded by the Reverend Thomas Quinton Stow at a service held in a tent on the banks of the River Torrens on 19 December 1837. The first temporary church building was erected on North Terrace the following year and in November 1840 a chapel was completed in Freeman Street.

A Congregational Union, to be formed from independent congregations in order to ‘discharge obligations which cannot be adequately fulfilled by local fellowships as such’, was proposed at a meeting at Hindmarsh on 4 October 1849. The constitution and rules were decided upon at a subsequent meeting at Freeman Street Chapel on 30 January 1850 with the general object of the society being ‘the promotion of union, sympathy, co-operation and the improvement and the advancement of the body, without in any case assuming legislative authority, becoming a court of appeal, or attempting anything that shall compromise the perfect independence of the Churches’.

Between 1965 and 1976 the Congregational Union set up a number of United Churches and parishes in conjunction with the Methodist and Presbyterian churches. This can be seen as a prelude to the more formal establishment of the Uniting Church in 1975.

With the establishment of the Uniting Church in 1977 the Congregational Union ceased to exist. 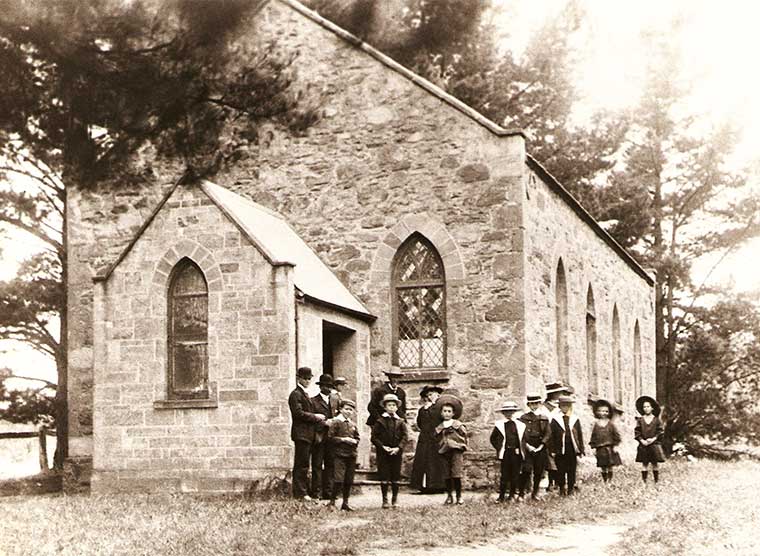 The Congregational Church in Lemar Court, overlooking Davenport Square. This photo was taken in 1912.

Close up of the churchgoers. 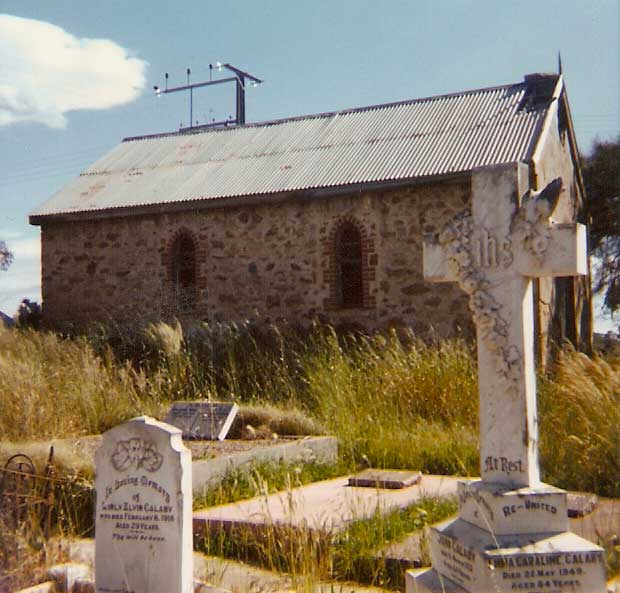 The first St John’s Anglican Church, since demolished, and Calaby family headstones in the adjacent grave-yard. The Calaby family were early settlers in the region. A seat by the path has since been built from some of the stone. Betty White's great-grandfather helped build this church. 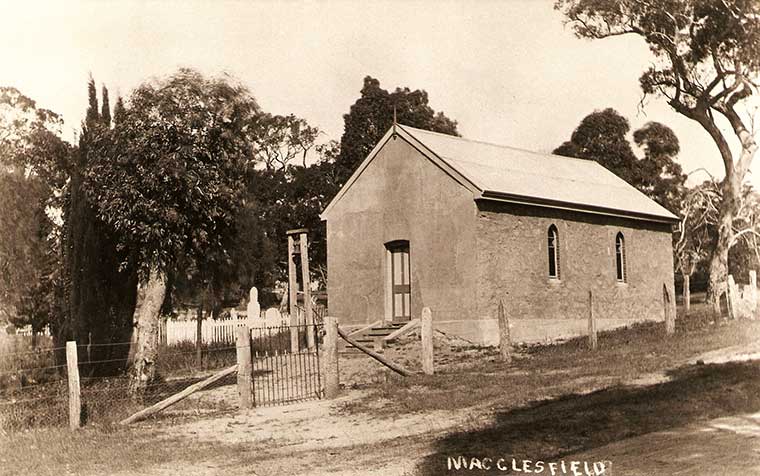 The first St John’s Anglican Church and adjacent grave-yard in Luck Street, built in 1856 and demolished in 1980.  The church bell is now at the new church in Venables Street. The graveyard still exists, and some are still buried there. The majority are now buried in the "top cemetery" or General Cemetery on Penna Road. 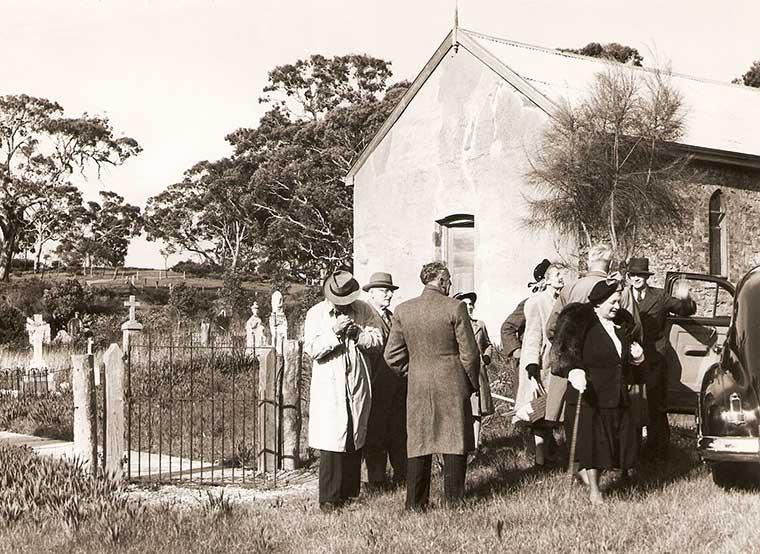 Sir Roy Robinson visits the old Anglican Church and cemetery. The gate in the picture was hand forged. A few years ago a local lady noticed that the gate was missing and was puzzled as to where it could be; she later saw it attached to the side fence of The Three Brothers Arms Hotel. When she spoke to the Publican he was only too happy to return it as he didn’t want something stolen from a graveyard. Thought that might bring him bad luck!

The new St John’s Anglican Church was built in 1926 from Macclesfield marble and sited on a portion of Davenport Square.  The roads were then realigned.

The following was taken from a note in the history files – ‘None of the furniture from the old church was used in the new building. The Altar Rails and Prayer Desk, which had been given by Strathalbyn, were offered back to that Parish. Due to the efforts of Mrs Bessie McDonald new pews were procured. The marble font was the gift of Mr Edgar Peterson in memory of his wife, and a ewer for the font was given by the Calaby family’.

Thanks to Trove http://nla.gov.au  for the following article printed in ‘The Mount Barker Courier and Onkaparinga and Gumeracha Advertiser’ ( SA:1880-1954) Friday 26 November 1926.
Macclesfield
"The dedication of the new Anglican marble church was performed on Sunday November 11, by the Rev. Dr. Thomas, Bishop of Adelaide. Over a hundred people could not gain admission, the church being packed half an hour before the appointed time. Interested visitors came from as far distant as Milang and Adelaide.

The pews are all made from Queensland maple and the amber coloured lead lights, presented by Mr A Peterson, gave the interior a beautiful effect. Messrs. Ross Bros. were the contractors and the responsible committee were:- Messrs. A and E Peterson, V Moran, H and H Ross, W Springbett, W Pope and F Bartsch. The Ladies Guild have made themselves responsible for the whole of the interior furnishings.

The new church, which has a central isle, is a great asset to the town and the building of which the members of St. John’s may feel reasonably proud. The woodwork was executed by Mr. E Trigg, of Mount Barker." 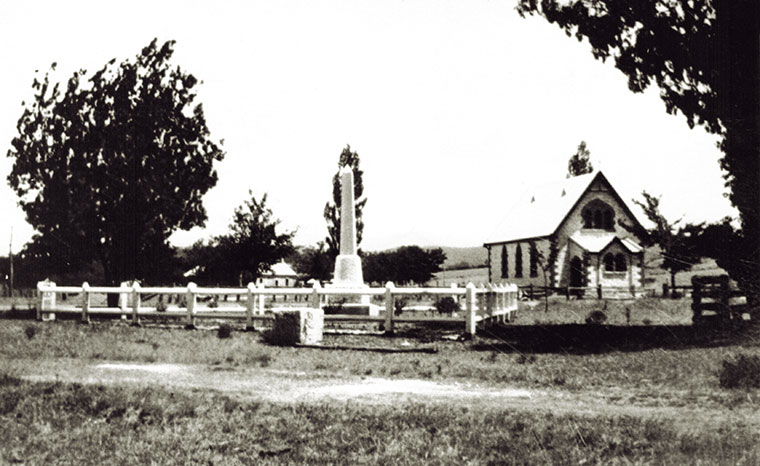 World War 1 Memorial c1920's, and St John's Anglican Church in background, built on a portion of Davenport Square in 1926. 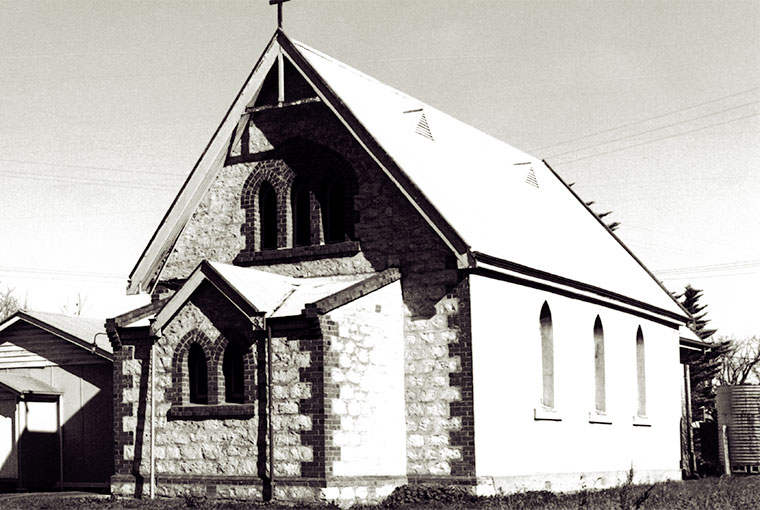 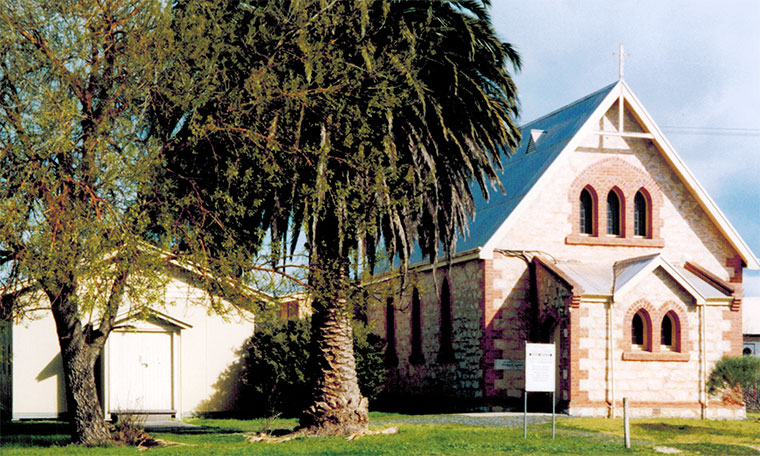 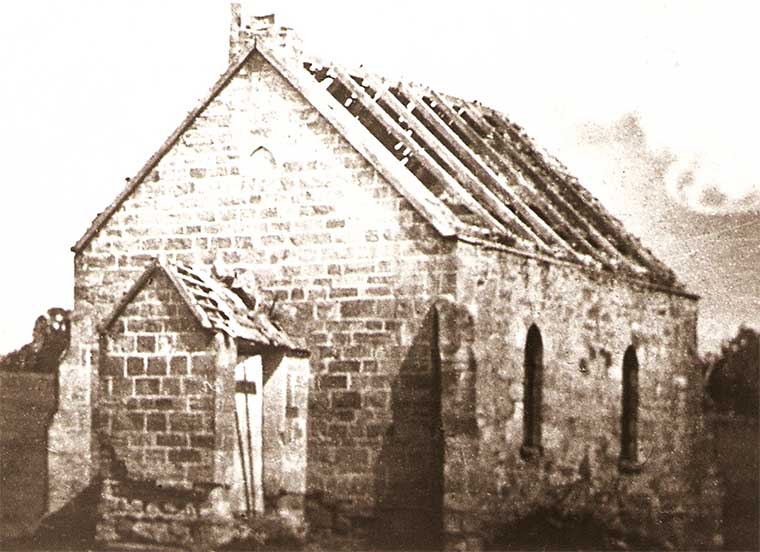 Watergate Primitive Methodist (Wesleyan) Church or Chapel circa 1905, since demolished. The Observer of 28th December 1860 reports the opening of the Chapel at Battunga near Macclesfield.

Stone from the church was later used to build a ford across a stream near the headquarters of the Angas River.

In 1857 the Wesleyan Methodists in the Macclesfield area raised funds to construct a chapel. It was designed in a simple Gothic style and built, it is believed, by the local carpenter/ builder, Richard Ward for a cost of £300. Local freestone was used in the construction but by 1955 it was fretting so badly it was decided to render the exterior walls with cement stucco.

A vestry built of red bricks was added in 1936 and a prefabricated building was purchased and placed on adjoining land for a Sunday School in 1958. In 1900 the Wesleyans became part of the combined Methodist congregations and in 1977 the Methodists joined with the Congregational and Presbyterian groups to form the Uniting Church of Australia. 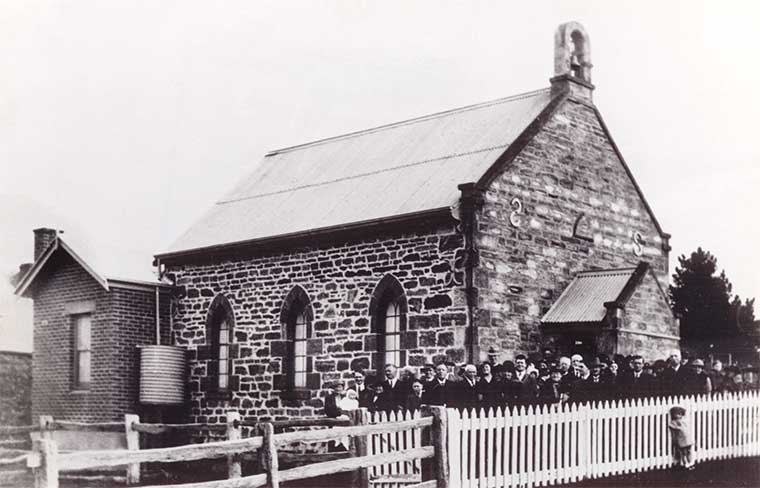 Wesleyan Methodist Church at the corner of Sturt and Cunliffe Streets, built in 1857. The vestry of red brick was built in 1936 by the Trigg brothers of Mt Barker.

A close-up of the church-goers, with little Miss Cool leaning against the fence.

Bert Davis describes his family's involvement with the church.