An Austin Ute and the Man from Southampton

Written by Bert Passfield (from the "Macclesfield Jubilee 1840-1990, Families Old and New")

As the sole survivor of my family - parents and five children - I am still living on the original farm and had my seventieth birthday on June 22, 1990. I was christened Hubert but am always known as Bert. My grandmother took over this property well over 100 years ago and it has always been a dairy farm.

My parents were Daniel Jeffrey and Florence Evelyn Gertrude (nee TONKIN); my brothers, Hurtle and Clarence and my sisters, Evelyn (Mrs Ray ABBOTT of Yacka) and Beatrice who lived in Macclesfield for all of her life.

Our father went to the Macclesfield Primary School (now the RSL Hall) just as we did, but Mother came here at thirteen years of age and worked in her parents' shop; a drapery and grocery store which still stands below the present primary school. I played table tennis here for many years.

As horses were the mode of transport in the early years I‘ve always been a lover of horses and of animals of any kind. Being born and bred here I dearly love the area but find everything changing a lot. Through my love and interest in all stock (especially calves) I generally go to the Strathalbyn Market on Thursdays to watch the sale, yarn to friends and then do my shopping. 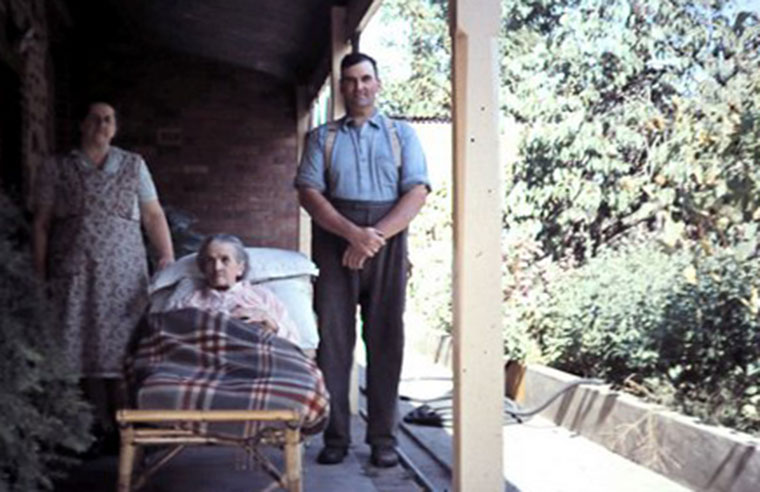 Bert Passfield and his sister Beaty (Beatrice) and their mother taken on the verandah of their house on Cosgrove Road (properly Cosgrave) at Macclesfield in South Australia. (Photo from Lindsay and Lyn Davis)

Bert Passfield on horse with his house in the background - on Cosgrove Road (properly Cosgrave) at Macclesfield in South Australia. The woman talking to Bert is the mother of Lyn Davis. (Photo from Lindsay and Lyn Davis)

An Austin Ute and the Man from Southampton 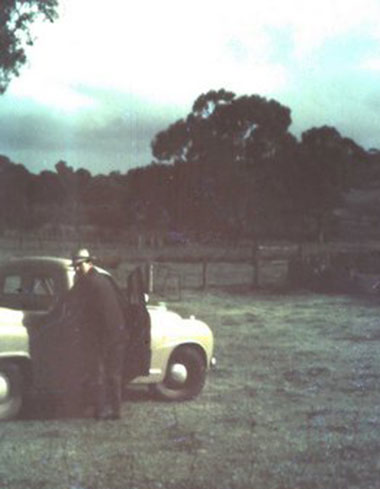 Thanks also to Bert’s neighbours, Lyn and Lindsay DAVIS who found this photo of Bert with his Ute.

Attached were photos of his shiny 1951 Austin Ute with English registration number 692 UTE. He told us that it is now living in quiet retirement on the south coast of England and that he and his wife take it to a few ‘Old Car Shows’ during the summer and occasionally on a Sunday spin.

Maurice was writing to us in an attempt to discover more about the history of his Ute. He had been told that the car originally belonged to a Macclesfield resident named Bert PASSFIELD who owned it for many years. Following Bert’s death in 1997 it was sold at a clearing sale on his property. 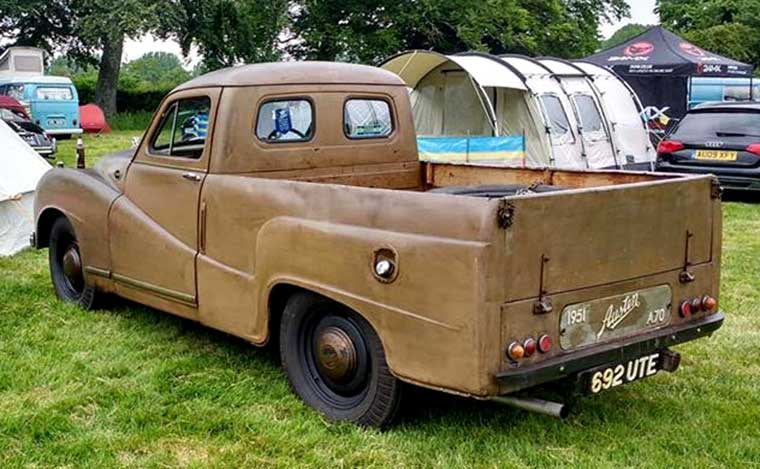 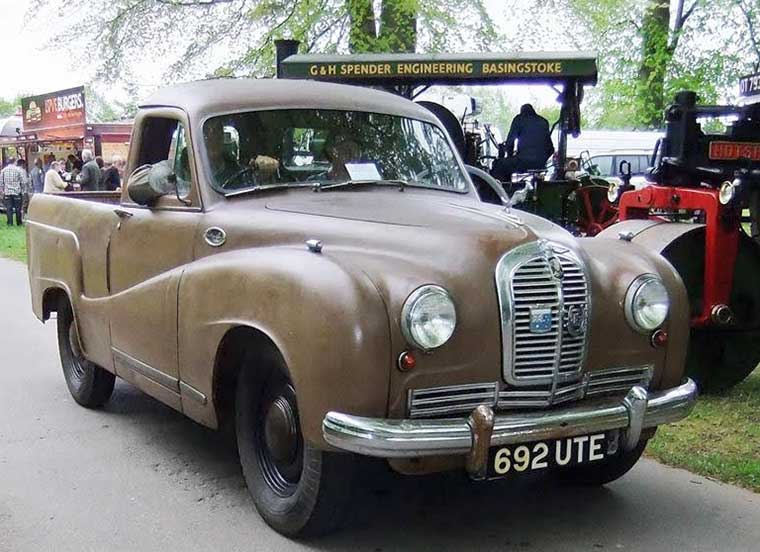 Later, Maurice bought it in 2009 from a sale in Adelaide and had it shipped back to England and since then had often wondered about its history. The original SA registration number was SA 332-352.

The most amazing thing is that we have been able to add to this story, as among the history files there is this Certificate of Renewal of Registration for the motor vehicle dated 1964-65.

The story continues as it is also possible that Bert bought his Ute from Sid SAWLEY who opened a new car showroom in Macclesfield in 1950 and became the Austin agent for the district. It is also quite likely that a local mechanic serviced this vehicle over the years.

From Paul Lemar:
Colin DAVIS. He married Joyce PASSFIELD in 1951Uniting Church, Macclesfield SA. Joyce was the daughter of Clarie and Myrtle PASSFIELD. They lived on the family property that was originally owned by Colin’s grandfather, Samuel Davis.

They were both active members of the Uniting church and Colin taught Sunday School there for twenty eight years, Superintendent for twenty four years and the Curator of the Macclesfield Public Cemetery for more than thirty years. He was appointed Justice of the Peace in 1967.

They established the Joylinda Ayrshire Cattle Stud in 1956 and were very successful breeders, winning numerous show awards. The highlight of their cattle career was winning first place against all breeders at the Royal Adelaide Show in 1987.

Colin did eight terms as Federal President of the Ayrshire Cattle Society of Australia and was made a Life Member at both State and Federal levels.

From the "Macclesfield Jubilee 1840-1990, Families Old and New"
Davis Family (Colin and Joyce)

Colin and Joyce (nee PASSFIELD) live on the property that was originally bought by Colin's grandfather, Samuel DAVIS, before he married in 1885. Samuel DAVIS first used the property for market gardening and dairying; later he built a creamery, buying milk from the local dairy farmers and putting it through a steam driven-separator. He then sold the cream to butter factories in Adelaide. In the early 1900's he bought the Macclesfield Dairy Company premises, which had originally housed the Macclesfield Brewery, and here he made his own butter and cheese. This property was later made over to his son Herbert.

Joyce is the daughter of the late Clarrie and Myrtle PASSFIELD (nee SCHMIDT), a pioneer family after whom Schmidt Road was named. Colin and Joyce have three children: Stephen, Gaynor and Katrina, and four grand-children; Julian, Jade, Hayden and Eben.

They have always been active members in both the Church and the community. Colin has taught Sunday School for twenty-eight years, he was Superintendent for twenty-four years, and has been the Curator of the Macclesfield Public Cemetery since 1948. He was appointed a Justice of the Peace in 1967. Both Joyce and Colin have good singing voices and in the past have frequently participated at concerts. Joyce can still yodel which is quite a unique achievement. Both have played sport for the local clubs: Colin - football, tennis, cricket and table tennis, and he still plays bowls for the Meadows Club; Joyce - basketball, tennis and table tennis. She still remembers the controversy that resulted when the hemline of their basketball uniforms was raised to knee level.

Colin and Joyce owned the well known 'Joylinda' Ayrshire Cattle Stud which they established in 1956. They proved to be very successful breeders and won numerous Show awards, but the highlight of their career was winning first place against All Breeds for a group of three dairy cattle at the Adelaide Royal Show in 1987. Unfortunately, because of age and health, the dairy herd has recently been sold although some young cattle still remain.

Colin is in his eighth term as Federal President of the Ayrshire Cattle Society of Australia [1990] and has been made an Honorary Life Member at both State and Federal levels. Colin and Joyce both immensely enjoy their association with the Ayrshire Society people and the trips taken to Conferences and other functions both within Australia and overseas in recent times.

Prior to the purchase of the original property by Samuel DAVIS some members of Colin and Joyce's families - great-grandparents - came to Macclesfield in the 1850's and descendants of these families have always lived in the area from that time.

Richard and Rachel TONKIN had two children, Walter and Florence - both married and had children. Walter married Janet LAW and had three children, Reg, Vin and Jean. Florence married Jeff PASSFIELD and they had five children, three boys and two girls.

From the "Macclesfield Jubilee 1840-1990, Families Old and New"
Eade Family
John and I (Kath), found the ideal place for our retirement at the Pines, (or Pine Lodge as our predecessors named it) in 1976 on the Strathalbyn Road. We have loved every minute of our fourteen years in Macclesfield.

For the first few years Church was within walking distance, and in those days we did a lot of walking, having had kind permission from Bert PASSFIELD and his sister Beatie and also from Herb KUCHEL to walk on their land. There was time too, in those days, to walk through Norm YATES and Derek REAVELY's properties down to the creek for watercress and to collect mushrooms from the paddocks.

Southern Argus Thurs. September 29th. 1932
Mr. William Anderson of Macclesfield, aged 78, who had a leg broken through a cow falling upon him, as he was releasing it from the milking shed, died at the Mt. Barker Hospital. His remains were interred in the Anglican Cemetery, where the Rev. R.V.S. Adams officiated.

Mr. Anderson had resided at Macclesfield all his life and was one of a very large and highly respected family. Mrs. Anderson predeceased her husband some years ago. Four children survive, Mrs. F. Bartsch (Macclesfield), Mrs. A. Passfield (Mt. Barker) and Messrs. H. and P. Anderson (Macclesfield)

From: The Long and Interesting History of the Macclesfield Institute

A bequest from the late Bert Passfield enabled the upgrading of the old Dressing Rooms, and carpet and new chairs in the foyer, plus more improvements are planned as money becomes available.

From the Macclesfield Cemetery spreadsheet researched by Paul LEMAR

From the "Macclesfield Jubilee 1840-1990, Families Old and New"
The Macclesfield Country Fire Service: A Brief History

Although there had been many fires prior to 1939, it was in January of that year that the whole of the South East of Australia was devastated by fires which caused huge losses of life, stock and property.

In South Australia the Hills area including Macclesfield was one of those hardest hit.

From the "Sabey Family" page:

John Sabey was not the first to buy land and/or to start farming in Macclesfield, but he was here quite early and information from Ms Pat Jaunzems now tells us that:- on the 10th of February, 1854, he purchased approximately 116 acres in section 2794 from a Mr Henry Lewis, for the sum of £420. He owned this section, which was known as "Pudding Bag Farm" for some 32 years. It was sold in 1886 to William Hill, who farmed it for 33 years, when it was sold in 1919 to Daniel Passfield, (another well known Macclesfield family name). (More recently it was the property where the Chatterton's lived).