All the official minutes from 1884 to 1888. Links:
• VIEW all the pages
• Provenance/Background of the Minutes Book.
• Example Page
• Surnames & Topics: please record these for each image, then forward them to us via email using our online form.

A plea: if anyone has old minutes books, or similar documents, then DO NOT throw them away. Pass them on to some historical agency, ours or others.

The BOOK - all the pages

These have been uploaded and can be accessed by clicking on the links below. The first few have been affected over time but thereafter their condition is good.

Local people, including Betty White, said that a man named Roger Anderson was thought to have found this Minutes Book on a rubbish dump. Subsequently he gave it to Arthur Edmonds, a neighbour, who was a Meadows Councillor representing the Macclesfield Ward.

Arthur Edmonds was Jan van Kaathoven’s father and he died in 1994. Following his death, Jan found the book among his papers, considered it worth keeping and stored it in a drawer at her home for the next 24 years. Six generations of the Edmonds family have lived in Macclesfield. Several of Jan’s ancestors, including grandfather Charles William Edmonds served on the Macclesfield Council. His name is noted in this Minutes Book.

Jan donated this book to the Macclesfield History Group in August 2018.

In quite poor condition after 133 years, we felt it should be conserved first before turning the pages. Via a very generous donation this was achieved by ArtLab in 2019, but it was not rugged enough to be physically handled by all and sundry for years. But at least we could now photograph it.

Professional photographer Rob Fairweather from nearby Strathalbyn photographed all the pages, and then converted the images to high quality but a reduced size, acceptable for Internet use. Visit his website at

All images were then added to this website for anyone to peruse, free of copyright.

An example page from the Minutes Book (click to enlarge): 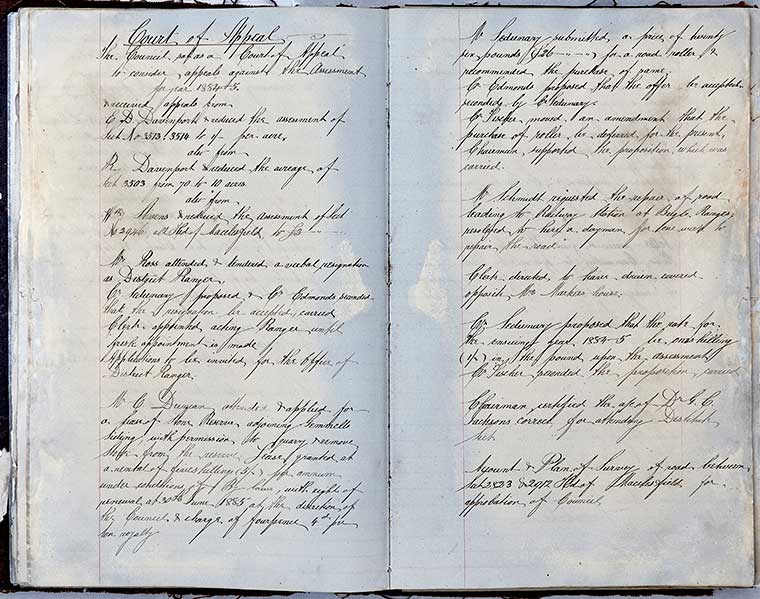 Please add surnames and topics to this table as you read the minutes. Since all writing is cursive, which cannot be converted to text, and then searched, in this way others will be able to find those who are mentioned in the minutes, particularly for genealogy information.